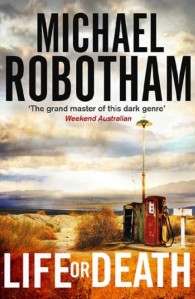 Michael Robotham received this year’s Dagger in London for Life or Death. He is only the second Australian to win, after Peter Temple in 2007 for The Broken Shore. Other writers on the shortlist included Stephen King and J.K. Rowling writing as Robert Galbraith. The Daggers, which were first presented in 1955, and the Edgars in the US are considered the world’s top crime-writing awards.