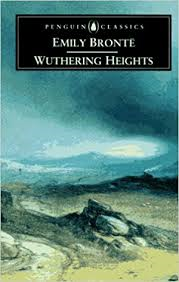 Publishers Penguin describe Wuthering Heights by Emily Bronte as perhaps the most “haunting and tormented” love story ever written, Wuthering Heights is the tale of the troubled orphan Heathcliff and his doomed love for Catherine Earnshaw.

Published in 1847, the year before Emily Bronte’s death at the age of thirty, Wuthering Heights has proved to be one of the nineteenth century’s most popular yet disturbing masterpieces. The windswept moors are the unforgettable setting of this tale of the love between the foundling Heathcliff and his wealthy benefactor’s daughter, Catherine. Through Catherine’s betrayal of Heathcliff and his bitter vengeance, their mythic passion haunts the next generation even after their deaths.

Pageturners talked about the setting, the characters, the narrators, some humour, the intensity of the novel, the writing, the isolation, the themes of revenge and redemption, whether Heathcliff was a hero or victim, selfish Cathy and obsessive love.

Comments included: “It’s a bit dated, characters are so intense, felt sorry for Heathcliff, love the language, beautifully written descriptions, feel like you are there or could draw it, very gothic and not realistic, didn’t like Cathy at all, it’s about love triangles, redemption, revenge and repression, Cathy’s a manipulator, Heathcliff was systematic in his revenge, there is physical and psychological violence, there are extreme behaviours, everyone’s feeling are intense, can see comparisons with Poldark, Bronte was ahead of her time, it’s about the class system and the role of women.”

Star ratings out of five for the book were mostly in the 4s and 5s. High praise for this classic novel.

The next meeting will be held on Wednesday 8th August at 5.30pm in Orange City Library to discuss books shortlisted for the Miles Franklin Literary Award. We will also try to predict the winner:

For more about the shortlisted books go to https://www.perpetual.com.au/milesfranklin. The winners will be announced on Sunday 26th August.

One thought on “Wuthering Heights Discussion”