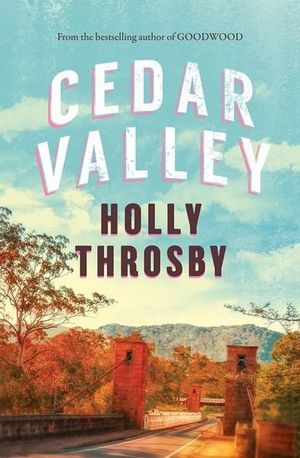 After seeing author Holly Throsby “in conversation” at Orange City Library some of us had a little extra insight into the book Cedar Valley. There was a lot of discussion as usual with some loving the book and others disliking it. The scores out of five reflected this and ranged from 1 to 5.

On the first day of summer in 1993, two strangers arrive in the town of Cedar Valley.

One is a calm looking man in a brown suit. He makes his way down the main street and walks directly to Cedar Valley Curios & Old Wares, sitting down on the footpath, where he leans silently against the big glass window for hours.

The other is 21-year-old Benny Miller. Fresh out of university, Benny has come to Cedar Valley in search of information about her mother, Vivian, who has recently died. Vivian’s mysterious old friend, Odette Fisher, has offered Benny her modest pale green cottage for as long as she wants it.

Is there any connection between the man on the pavement and Benny’s quest to learn more about her mother? Holly Throsby is the perfect guide as Cedar Valley and its inhabitants slowly reveal their secrets.

There was a lot of discussion about the ending.  Some Pageturners found the end frustrating with not all the loose ends tied up, but others found if they thought about it for a while most things were resolved. Here are the Pageturner comments:

“Constant unknowns annoyed me, characters well drawn, coincidence she arrived the same time as the man in the street, there was no ending, there two stories and two mysteries, characters were believable, it was drip drip drip revelation, intricate rather than complex, the author obviously loves small country towns, heaps of characters and they all have their part to play, my appreciation went up as I went along, I liked the book – you could put together the pieces yourself, Vivian was not believable, she was a trailblazer – a feminist – a free spirit, I found it banal and boring and very difficult to get through, the writing was flat, I didn’t like the structure, she built a whole story around another event – the Somerton Man, little things annoyed me like the policeman drinking instant coffee and Australianisms like Weetbix etc, found it odd to have a python in the roof, I really enjoyed the leisurely pace, detailed characterisation, I could think of people in real life the characters related to, it was folksy, candid, classic, and unaffected, I thought there would’ve been a more definite ending, the meaning of his real name was ‘small’ – that didn’t get a mention, I noticed the connection between the crown and moon on the comb – their last names, many themes were played out – identity, betrayal, deceit, honesty, loyalty etc.”

For more about the Somerton Man listen to this ABC Radio program.

Earlier in the year we had a discussion about Vocabulary of Appeal from Novelist that could be used to describe a book. This is an optional useful guide to help you find the words to explain a book you are reading and to aid book conversations.

And we know everyone is still getting used to booking but it does help with our planning and putting out chairs and catering. If you are able to access the internet, please go online to eventbrite (you can also access it via the events button on the front page of the website) and book your place, if you are unable to access the internet please phone Jasmine directly on 6393 8125. And if you prefer to email please use jvidler@orange.nsw.gov.au. Thank you.

The next book for discussion is Bridge of Clay by Markus Zusak.

Let me tell you about our brother.
The fourth Dunbar boy named Clay.
Everything happened to him.
We were all of us changed through him.

The Dunbar boys bring each other up in a house run by their own rules. A family of ramshackle tragedy – their mother is dead, their father has fled – they love and fight, and learn to reckon with the adult world.

It is Clay, the quiet one, who will build a bridge; for his family, for his past, for his sins. He builds a bridge to transcend humanness. To survive.

A miracle and nothing less.

Markus Zusak makes his long-awaited return with a profoundly heartfelt and inventive novel about a family held together by stories, and a young life caught in the current: a boy in search of greatness, as a cure for a painful past.

Markus Zusak is the bestselling author of six novels, including The Book Thief and The Messenger. His books have been translated into more than forty languages, to both popular and critical acclaim. He lives in Sydney with his wife and two children.

The discussion will be held at Orange City Library on Wednesday 12th December at 5.30pm.